Description:
Since 2001, Dyrand Systems has provided IT support to companies in Canada, freeing up our clients to focus on the success of their business. The fact is, most people only really think about IT when something goes wrong. At Dyrand, we’re thinking about IT all the time. Our goal is to work with our clients to strategically plan on how to get real returns from their technology investments and avoid costly downtimes.
#Named to MSP50 Canada Award

Each year, the cloudtango awards recognize the most successful MSPs around the world in what has become a global reference due to its independent approach, and in-depth analysis. The selection of Dyrand Systems for the MSP50 Canada award, confirms its technical excellence, customer focus, and innovation within the industry. 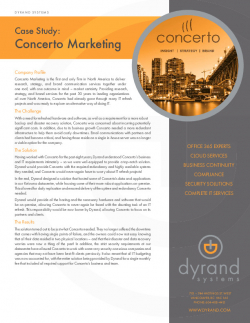 With a need for refreshed hardware and software, as well as a requirement for a more robust backup and disaster […] 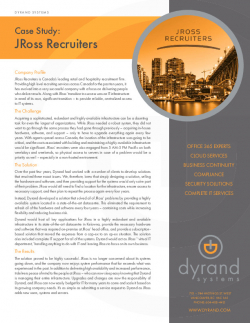 Acquiring a sophisticated, redundant and highly available infrastructure can be a daunting task for even the largest of […]

San Francisco-based Herrero Builders is a commercial general contractor in operation since 1955. Their work spans new […] 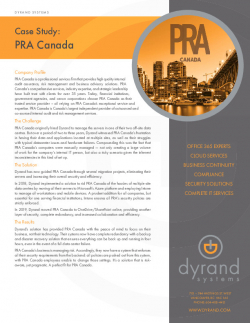 PRA Canada originally hired Dyrand to manage the servers in one of their two off-site data centres. But over a period […]

Dyrand Systems has been the UNA’s IT Managed Service Provider since 2018. The University Neighbourhoods Association (UNA) oversees the major residential neighbourhoods around UBC’s campus: Chancellor Place, East Campus, Hampton Place, Hawthorn Place, Wesbrook Village, and other designated buildings. The UNA is a non-profit society that manages infrastructure, such as street and sidewalk repairs, and regulates matters of concern in the public realm, such as parking and noise.
Dyrand Systems has played a key role as a project lead to support our organization in our migration to the Office 365 environment. From a day-to-day operations perspective, the Dyrand Systems team is very responsive to our service requests. Dyrand Systems’ team of technicians are knowledgeable and able to resolve our unique requests within a short time frame.
As an operations manager, I’ve had a great experience dealing with Dyrand Systems’ service and support. I receive consistent service from everyone, from their leadership team all the way down to their technical support team members.
I would wholeheartedly recommend Dyrand Systems for your IT Managed Services provider.

We are very pleased with the service Dyrand Systems provides. Their technicians are respectful and caring, and always willing to try multiple avenues to fix our issues. Their staff go above and beyond, even when working on last-minute requests that need to be completed quickly. They complete tasks ahead of schedule, helping us get our work done, with very little delay. Their account management team meet with us quarterly to ensure that we’re well-informed about our technology, and where appropriate, recommend changes that can help us work more efficiently, and save money. We really appreciate their help. Five stars!

We’ve been a client since early 2011. Before Dyrand Systems, we had a guy that came by every now and then, things were continuously going wrong with no ability to be proactive with technical issues. Dyrand Systems has brought a more proactive approach to IT and has been able to get things under control. Dyrand Systems has also outlined the necessary requirements based on our business needs, implemented an automatic backup and Disaster Recovery solution that helps to eliminate risks with our data and systems. We have already had to perform restores from this system and each time it’s been very painless and takes very little time to get back up and running again.

We are delighted with Dyrand Systems’ service. We have been working with them for 6 years. They have helped us upgrade various technology components, work remotely, and improve business continuity. They’re very responsive. The technicians are very knowledgeable, and we have rarely had a problem that they could not fix right away. Cybersecurity is one of the biggest issues for any business and they are all over it. I have a Computer Science degree from SFU and run an IT consulting company so many of us know quite a bit about technology and I can tell you that what they implement is great.
Even with our technology experience, we still outsource the support of our IT infrastructure to Dyrand Systems so we can focus on growing our business without distractions. We have grown the business a lot in those six years without having to worry about IT support, security patches, setting up remote access, software upgrades, etc. Definitely peace of mind.
I have been involved in RFP processes with clients who have gone out to tender to find a company like Dyrand Systems, so I am aware of many of the companies in this space in town and I can tell you there are a few good firms and many not so good firms. Dyrand Systems is one of the good ones (one of the best ones). I am very comfortable highly recommending them (Dyrand Systems) and we have no plans to switch providers in the future.

Since 2005 Dyrand has been looking after both Vancouver and Napa offices. When Dyrand took over management, we had an in-house IT guy who had built up a very complex network with many old servers purchased from e-Bay. This caused a considerable amount of downtime and overall issues. Once Dyrand got in and started cleaning it up, they reduced the infrastructure and complexity and minimized the downtime and problems. Dyrand provide us with full services; from managing the complete infrastructure to desktop support and with the CIO level planning. Dyrand has recently started working with our internal IT staff to implement proper policies and procedures to further improve procedures such as new hires, etc.

We have been a client of Dyrand since 2004. They have helped us grow to our full infrastructure capacity by providing 100% support for our conveyance software, managing the infrastructure side of ProSuite, and proactively supervising those services. Their help desk skillfully supports all our end-users, including our staff members who often work remotely.

We have a small tech team and with Carbon60 handling all our AWS infrastructure, DevOps, monitoring and deployments, we can focus on development instead […] Read More

View Map of MSPs near Vancouver

Are you from Dyrand Systems? Edit your profile | Collect your tango widget | Upgrade to tangoPlus
Managed Service Providers near Vancouver